This is the Character Bill, our character initiative and some information I found online. We like so many others feel this is a necessary intervention. We must teach our children character education in our school systems K-12 for them to have a more positive direction to improve their lives and our communities.
Before now there were only 10 min. of Character Education required per day to be taught in schools. We have got to revolutionize the way we are educating our children. The news and media are saying what we teaching our children in school is not working. Thank you so much for all that you will do for Our Childrens they need us more than ever!

I have also spoken with Mr. Danny Carr, DA; he promised to do everything he could to get this bill passed.


"It is easier to build strong children than to repair broken men."
Frederick Douglas
"Intelligence plus character - that is the goal of true education."
Dr. Martin Luther King, Jr.

The Nick Bell Mentoring Memorial Foundation relies on the generosity of supporters like you to have an impact in the lives of young people. 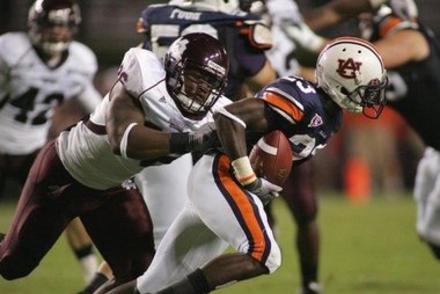 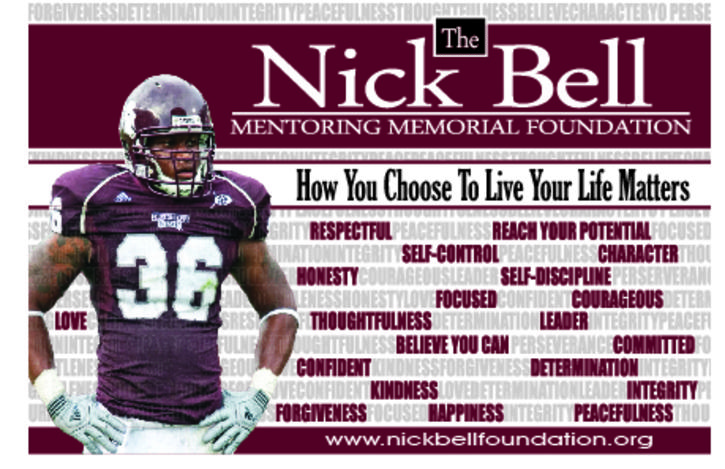 OUR MISSION IS TO EMPOWER CHILDREN, TEEN AND YOUNG ADULTS TO REACH THEIR POTENTIAL SO THAT THEY MAY LIVE THEIR DREAMS.

Support our mission. Sustain or services by donating to The Nick Bell Foundation. Thanks!

Please contact the State Representative and Senator to vote for this Bill. We need character education taught in our school systems grades K-12

STARKVILLE, Miss. -- Inside the glass walls of the Bryan Athletic Administration Building is a grand foyer with a bronze Bulldog perched on a marble slab.

Get past his stoic stare, and an elaborately carved table to the right stands out. On it sits a small stack of student newspapers from Friday's edition of The Reflector.

We are pleased to give back to the community through scholarships. It is one of the many ways that we support young people. 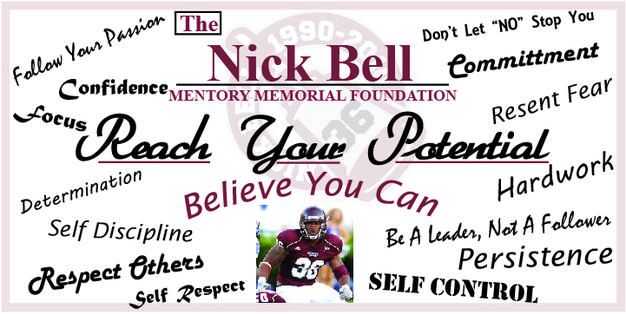 A headline stripped across the front page reads, "Remembering No. 36."

Nick Bell is pictured just below the words that tell the all-too short story of his young life and his losing bout with cancer. Bell died last Tuesday at the age of 20. The full-color image shows the 6-foot-3, 265-pound defensive lineman dressed in a maroon Bulldogs uniform full of energy, strength and determination during a 24-12 win against Georgia on Sept. 25.

Bell was at the height of his life.

Now the Bulldogs will honor him by dedicating every minute of every game to their fallen teammate, who also touched the lives of some at Alabama.

Mississippi State, which takes the field for the first time since his death when it plays Alabama on Saturday, will wear patches to honor Bell, and some players will wear his jersey for the rest of the season.

"For our guys, you play with a little heavy heart," Mississippi State coach Dan Mullen said. "They're going to move on a little bit every day. They'll put it behind them, but it's certainly not going to be out of their minds. In a situation like that, I don't know how it becomes motivating to anybody except for the fact maybe the lessons Nick taught you in life and trying to live your life to the fullest."

Many of the Bulldogs spent their idle week traveling across a four-lane highway that links Mississippi and Alabama. They went to Birmingham to visit Bell, a Bessemer native.

On Saturday, they attended his funeral.

"It was just emotional, just sad, the whole thing about it," Bulldogs linebacker Chris White said. "We've all dedicated the rest of the season and the rest of the practices to Nick Bell. We just want to keep playing hard for him because we know that's what he would want us to do."

Back in Tuscaloosa, Alabama defensive end Marcell Dareus shared some of his memories of Bell. They had forged a friendship that spawned in youth football leagues.

The bond was so close the two would speak before each football game and bet on who could get more tackles or make more plays.

They would play video football games, though Dareus said they weren't very good. Bell was always Mississippi State and Dareus said he always won with Alabama.

Sometimes they would wrestle, "just act like kids," Dareus said.

Their relationship also became a welcomed escape from the rigors of major college football.

Ironically, football will forever link Dareus and Bell's Mississippi State teammates to their fallen friend as they share the memory of a promising life.

In Case of Inclement Weather, The Camp Will Take Place in the Gym.

​Nick Bell was born June 25, 1990. On November 2, 2010, at the age of 20, he passed unexpectedly from a rare form of cancer. Nick was the youngest of three children. He was the uncle to Zion McAlpine and was adored by his two older sisters, Monica Bell McAlpine and Ashley Bell Windham.

Nick graduated from Jess Lanier High School, in Bessemer, Alabama where his outstanding academic and football career resulted in Nick being highly recruited by many colleges and universities. Nick signed with Mississippi State University and focused his studies towards a degree in Kinesiology. During his time at Mississippi State, Nick became a starting defensive lineman and joined the brotherhood of Omega Psi Phi Fraternity, Inc.

Nick promised his mother, Linda Bell, that he would always mentor young people as part of his life-long commitment to serve his community and give back. Help Nick keep the promise he made to his mother by giving Nick’s Foundation your generous, financial support.

Support the Nick Bell Foundation Character Curriculum being taught in your local school.